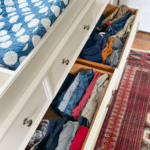 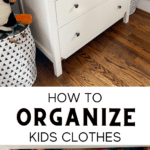 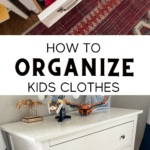 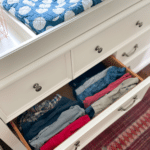 From the laundry room to storing off-season articles and hand-me-down items, kids clothes organization can become one giant mess! Here are tips to help you sort, store, and organize kids clothes in a simple and smart way. 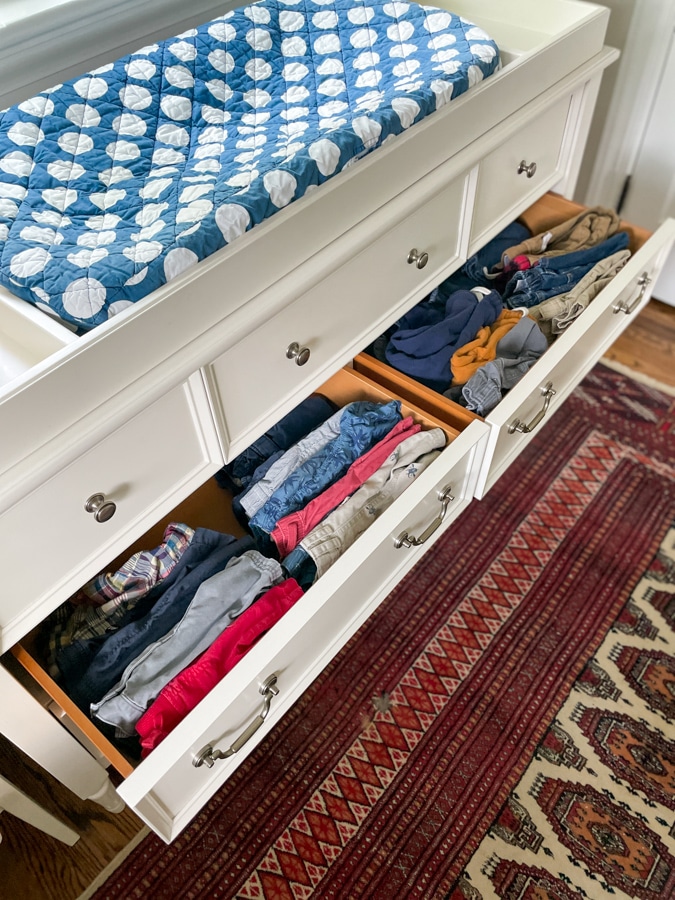 I’ve written about kids toy storage many times, but I haven’t done a full post on kids clothes organization! I had a blog post request from a reader who feels overwhelmed with the current state of her kids’ clothes.

Kids clothes are hard for a few reasons:

Both of my boys have almost all of their clothes in a dresser. I think folding and sorting is easier than hanging, and both of them use their closets for toy storage, so the clothes go in a dresser. That said, Mazen has a few of his dress shirts (that he never wears) hanging in the far side of his closet. 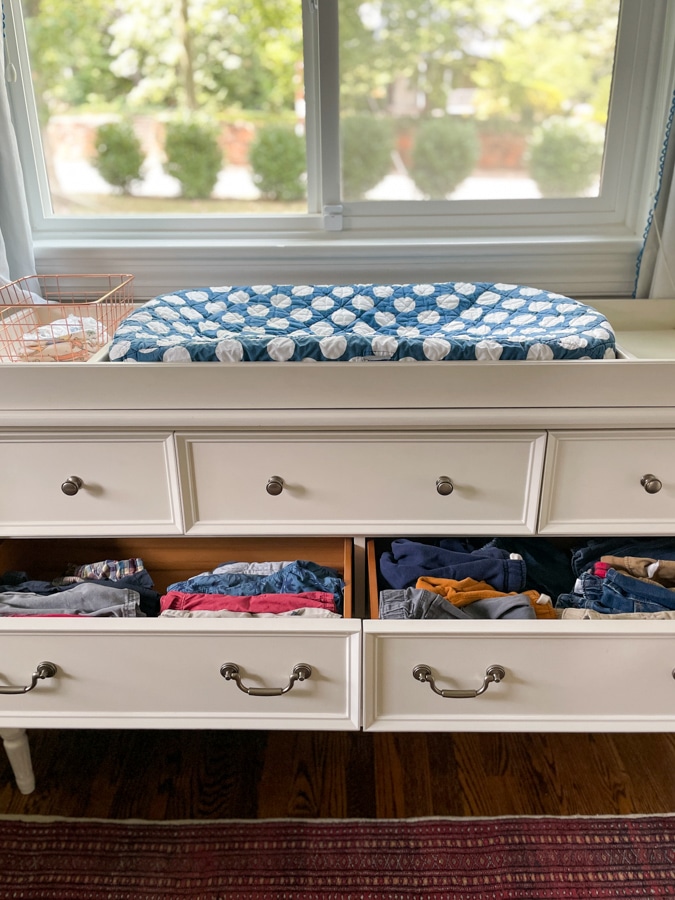 Rather than fitting the space to their clothes, I aim to fit their clothes to the space. Mazen’s dresser is a big 3-drawer from IKEA and Birch has many smaller drawers in the Blithe Dresser from Pottery Barn (which also served as our changing table). I will say that the quality of the Blithe, which came assembled, is WAY better than our IKEA dresser, which Thomas has had to repair twice for wobbling. 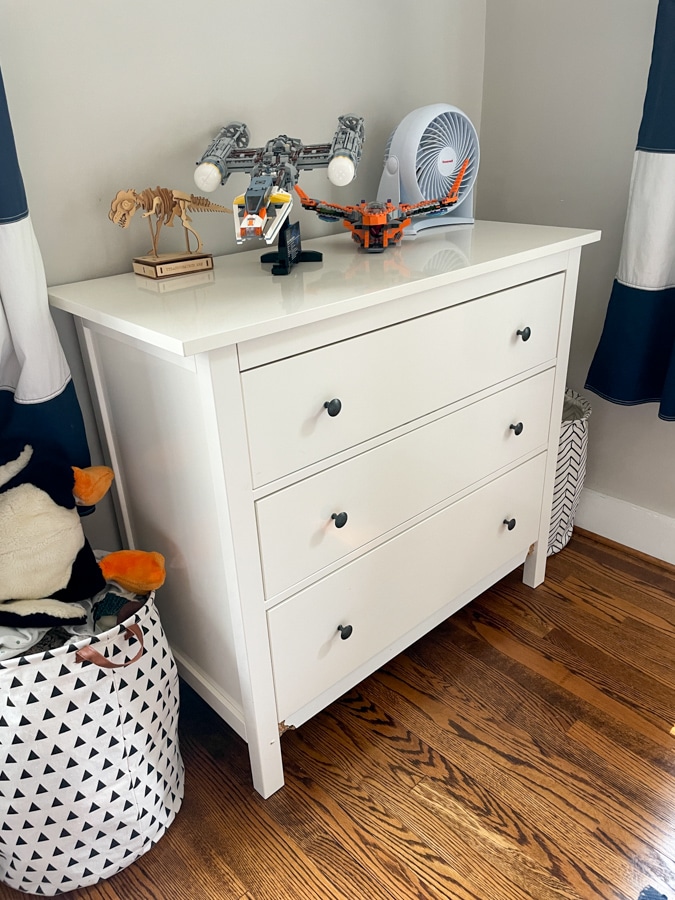 How to Organize Kids Clothes

Now that we have discussed containers, let’s talk strategy!

How to sort the clothes in drawers

You have choices on how to sort the drawers:

The type you choose will depend on the age of your child and where you live! I have actually done both, but what I find works best for us is to sort by body part and group like with like.

If you have a dresser with many drawers, you probably don’t need dividers.

If you have all shirts in one drawer, you’ll want to use dividers to separate short sleeves and long sleeves.

I like a lightweight fabric organizer that is square or rectangle – like these! Or these for a higher-end option. I don’t feel it’s necessary to have the dividers that have a million little slots (like these) because it takes too long to put the socks or underwear in them! And I don’t care for drawer dividers (like these) because I like to take the whole bin out sometimes. But obviously you can use whatever you prefer so long as you and your children actually use them! 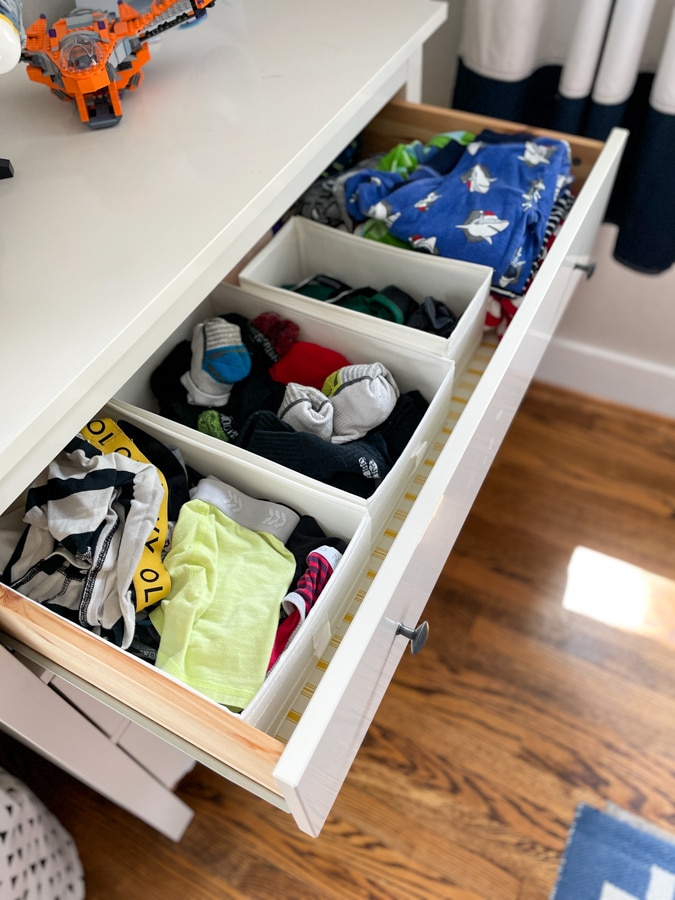 How to Fold Kids Clothes

The big question: to roll or not to roll.

I am a big fan of the casual half fold. Shorts get folded in half; shirts get the bifold and then a half fold. I don’t care for rolls because 1) you can’t see which shirt it is as easily and 2) they come unrolled too often.

I also have a goal of putting away laundry as fast as humanly possible so I always choose the quickest option. In my opinion, rolling takes longer. 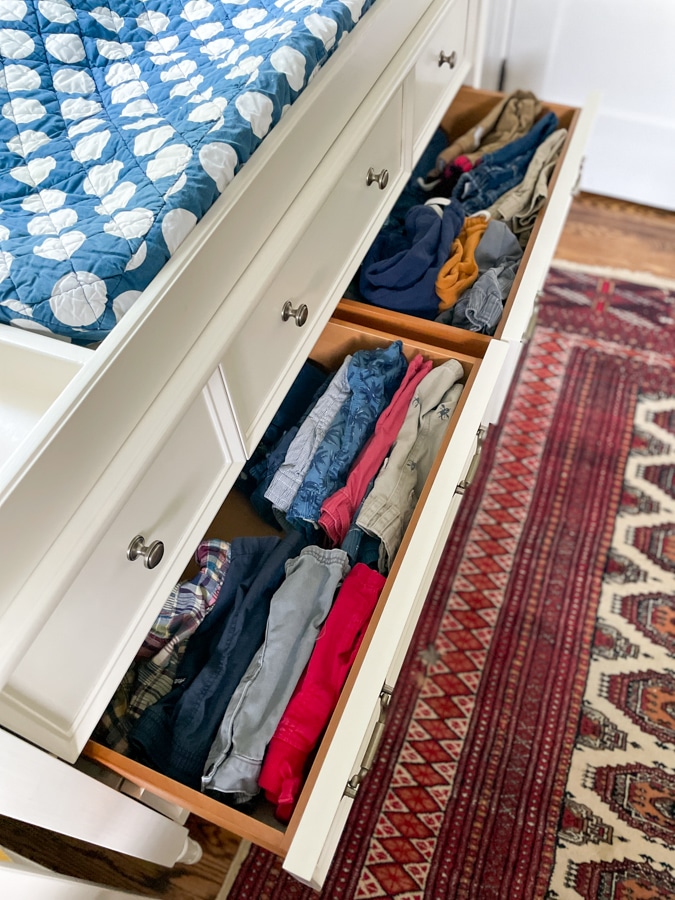 I actually don’t fold all of my kids’ clothes

This will come as no surprise if you’ve ever watched my YouTube video on how not to fold laundry. I don’t fold PJs, underwear, or socks. Who cares if they’re wrinkled!? And I only very lightly fold shorts and t-shirts. Again, the goal is to go from dryer to drawers as fast as I can to make the chore efficient! 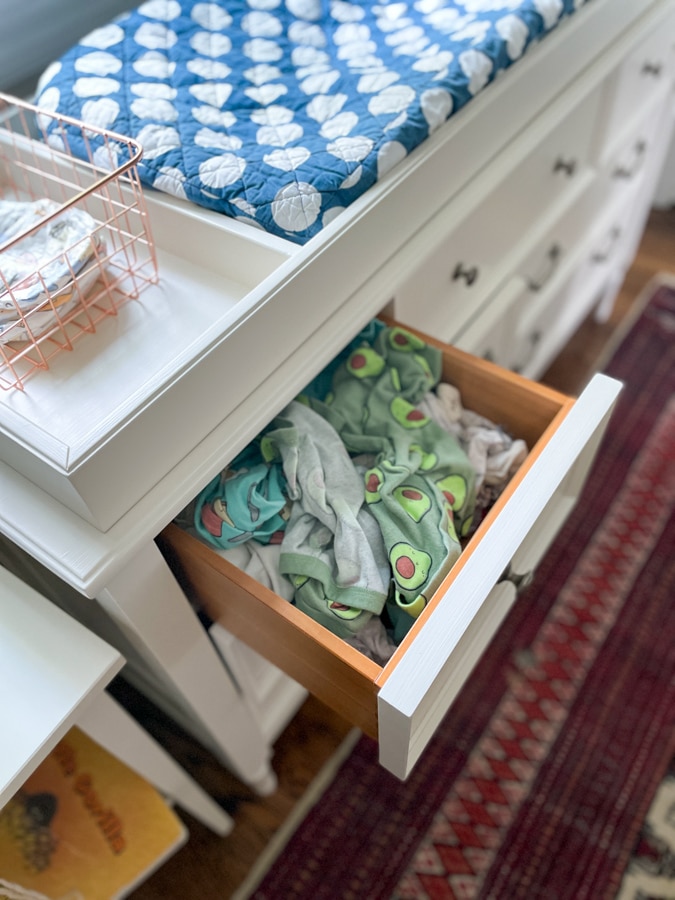 Another tip: buy only one kind of sock in one color!

Then you can just toss them all together and grab two at a time.

Disclaimer: Birch does have colored socks in his drawer, but I use the white ones on top most often for this reason! 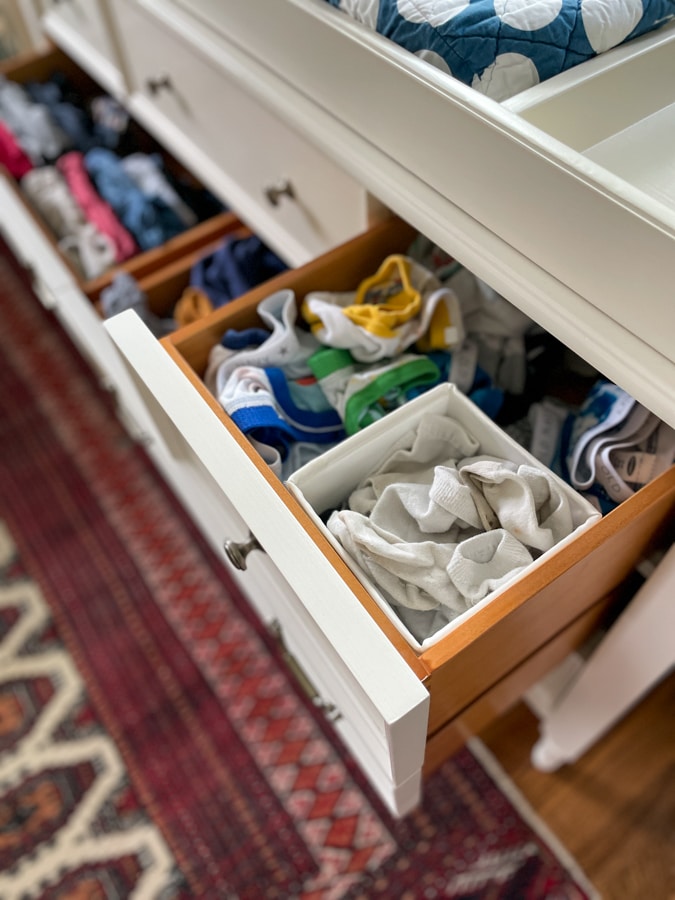 My boys are currently almost 3 and almost 9.

Birch doesn’t really go into his drawers. Sometimes he will for a specific shirt or shorts, but for the most part we lay out his clothes before he gets dressed.

Mazen, however, is the one in his drawers most of the time. He can put away his laundry and decides what to wear (athletic shorts and a tee every day). He also rustles through when choosing an outfit and puts things back in after rejecting them sometimes (a too-small shirt, for example) so I do go in and maintain his drawers maybe every other month. Since he doesn’t have a TON of clothes and he only has 3 main drawers, it’s pretty easy to do! 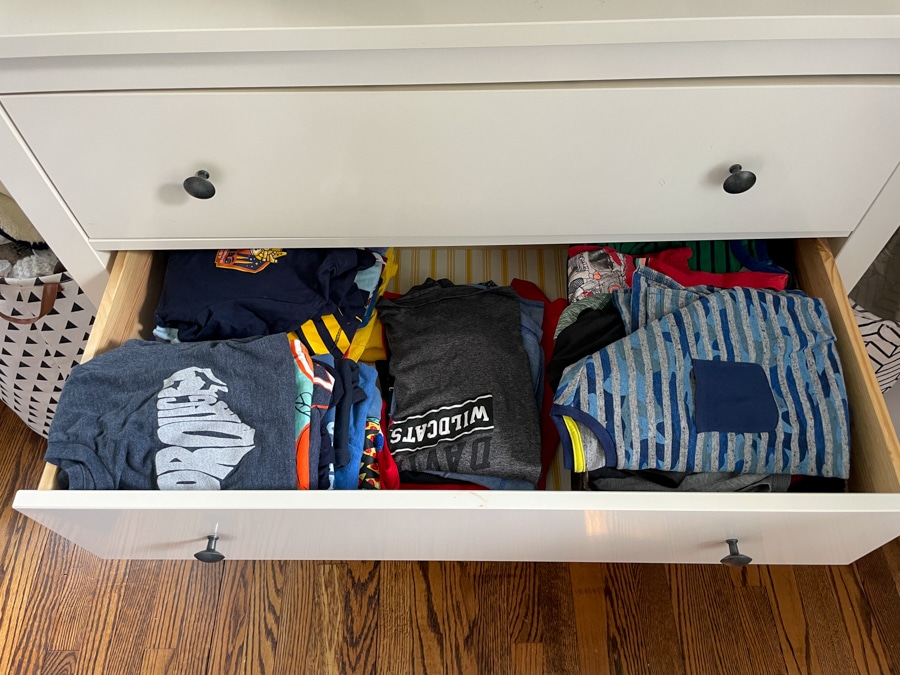 Create a System for Hand-Me-Down Clothes

And finally, the biggest headache of them all: hand-me-downs!

What do you do when you want to save clothes for a younger sibling OR if you are given a lot of hand-me-downs and need to store them? We’ve also had a wide gap between kids (who thankfully are both boys so sharing is maximized). Here’s what I do:

I only save the VERY best clothes. I have learned that something that was just OK when Mazen was young will be just OK when Birch is ready for it too. With a six-year age gap, styles change too, so I only save the most pristine, timeless clothes. Do not save anything that is stained or torn – take it from me.

Where and what you store in will depend on your house. I used to have a few big plastic tubs in our attic and now I have paired that down to just TWO under bed storage bins that are much easier to access. You can store the clothes in a closet, an attic, the garage, or even a friends’ house. Or you can loan them out to a friend with a child whose age is in between yours (I sent my friend Sarah all of Mazen’s clothes and most of them came back two years later!).

Note that if you’re storing really nice clothes in somewhere really moist or hot they might yellow. That’s another reason I switched from attic to under bed.

When I bring a tub out of storage I go through it again and usually can eliminate even more clothes that I know either won’t fit in our dresser or I just don’t love. Then I wash all the keeps and donate the rest!

Whether you like to buy things on super-sale at the end of next season, are gifted clothes for your kids to grow into, or have the next size up saved from a sibling, you’ll probably want easy access to next season’s clothes. This is another reason I love under-bed storage bins to organize kids clothes! They are just tucked away enough to be out of sight, but they are very easy to access should you need to get a sweater in early fall, shorts in early spring, or those rain boots that were just a little too big last year. 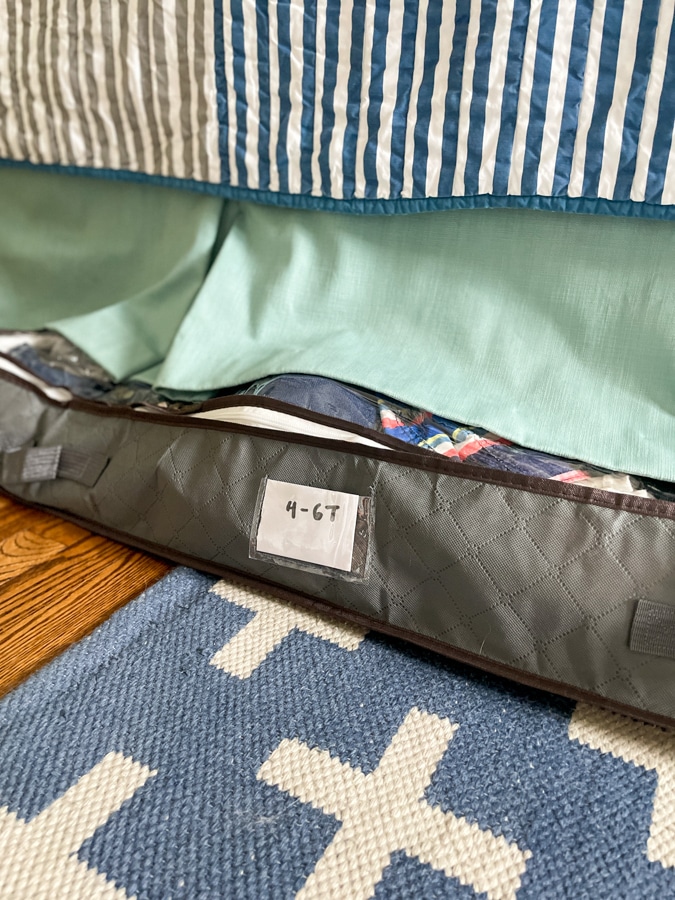 Which type of under bed bins are best?

We used to have big plastic roller bins but they broke! Probably from a child walking on them like so: 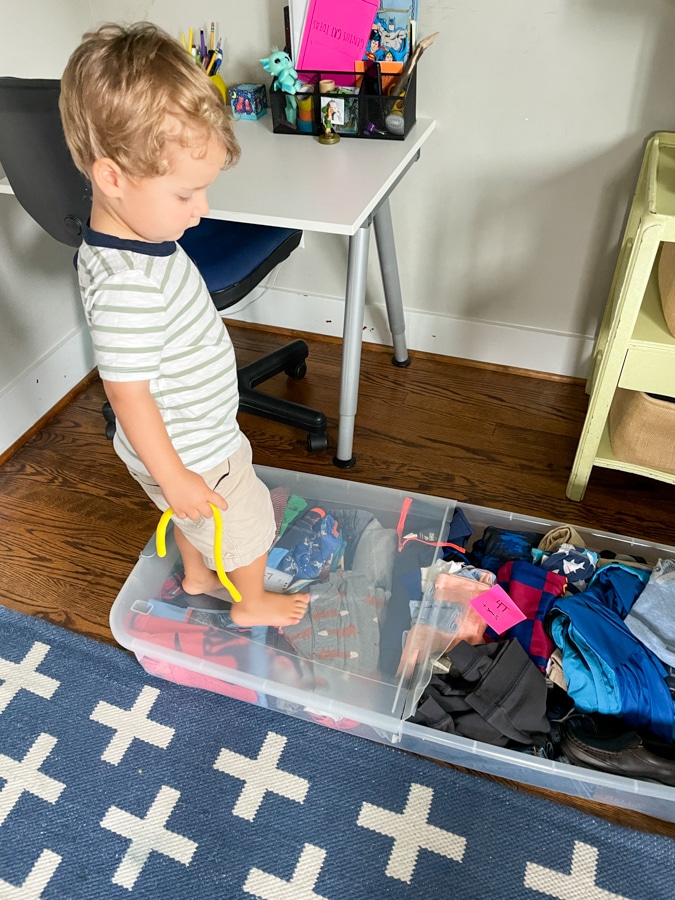 I switched to these from Amazon to organize kids clothes for the upcoming season and have been really happy. They are actually bigger because they stretch, have an easy label area, and are flatter/able to be smushed so I can fit more under our low bed. Note I did have to unwrap the clothing items and let them air out outside for a bit because they had a plastic smell out of the package. 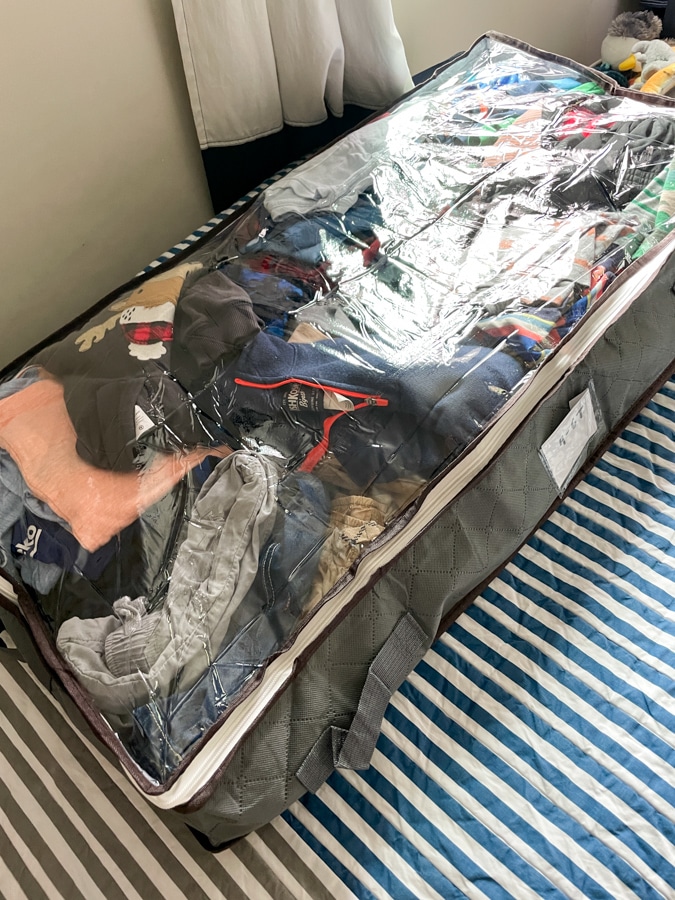 That’s all I got, friends! I would love to hear you organize kids clothes in the comments 🙂

How To Organize Your Gmail (To Get To Inbox Zero Faster)